In Which I Feature DAUGHTER OF NO TEMPLE (AKA I SUBBED TO PITCH WARS!!!)

I've just submitted to #PitchWars, a mentoring contest run by Brenda Drake and supported by many amazing authors in the writing community. I'm in the lovely "waiting to hear" phase (actually very short for the publishing industry, so it's not so bad!) and since I couldn't put *everything* I love about my book into my query, I decided to share here. 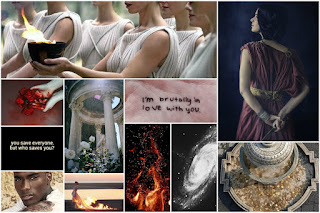 The book I submitted (mentioned in my #PimpMyBio post) is called DAUGHTER OF NO TEMPLE. When I sat in the movie theater watching Wonder Woman I was excited (okay yes because it was freaking WONDER WOMAN but also) because these were the kinds of fights I was writing about (I watched so many hours of fight expert videos on YouTube!), with a woman kicking ass. And the costumes were very Guerran/Volieran. I had been worried some of my fights were too over the top (okay no one jumps as high as in WW) but everyone loved WW, SO. Confidence! BUT THEN I realized an even better comp for DONT might be She-Ra. For reasons. That I won't go into so I don't spoil the book. (Don't worry, she's not like secretly Lukas' sister, like He-Man. Or Star Wars. Not that they look anything alike.)

But I *can* share Random Facts About DAUGHTER OF NO TEMPLE:

~The working title (just so I could keep files easily searchable and refer to it when speaking with my family) was CLEAVE. Hahahahahayeah. It was this whole swords/cutting away/clinging to/falling in love idea. Contronyms are fun! But it was never going to be the real title.

~There are Easter eggs, some of which allude to Pride and Prejudice, Florence and the Machine, and Hilary Clinton.

~My critique partner asked if the male main character, Lukas, was intended to be autistic, because of things like how he hyperfocuses and fidgets (and he's brilliant). Honestly a lot of him came from myself (haha, not the brilliant part, the socially awkward part). I did shape it the way my CP wondered. I hope he is indeed the kind, positive rep my CP noted him to be.

~Arina is plus size. So is Cal, the secondary female character. I left their descriptions somewhat vague so that readers can picture them how they want, but I picture Arina as a stout, curvy softball player or weight lifter, basically, with thighs that can break a man's neck. Arina is a warrior, Cal hikes through forests and climbs mountains, and both save the world.

~Arina was also partly inspired by this Chilean protester:

~Lukas I figured out after getting a good sense for Arina--what his skills were, what he looked like, and what had wounded him, and how that informed who he had become. That in turn revealed to me why he feels how he does about Arina.

~Aja was inspired by two students of mine from years ago, down to looks and mannerisms. They didn't get into physical fights, but were passionate like Aja.

~Markos was inspired by a few different actors and ideas in my head, but one was Edward James Olmos. THAT VOICE.

~Cal took the longest to develop. I had ideas for her for throughout the book, but I only figured her out as I made my way through the whole draft. Even after revisions and CP input I might still be figuring her out, TBH. But I adore her. Everyone loves Cal!

That's all for now! You can also read more about my background in last year's #PimpMyBio. I'm going to try to dive back into planning my next book, which is still a secret but I'm super-excited about. You know how they say when you're terrified to write a book, when you think you can't handle it, that means it's the right book to write and will be amazing? Well, this book is apparently going to be really amazing.