Off Book: SURRENDER YOUR SONS by Adam Sass 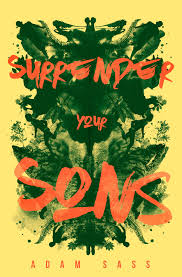 SURRENDER YOUR SONS is a YA mystery set on an island—like LOST but very, very queer. A gay teen named Connor finds his summer vacation interrupted by a group of masked men who abduct him and deliver him to a conversion therapy camp on a desolate Pacific island. Connor’s religious zealot family arranged this for him, but he has no intention of staying.

Connor then teams up with the other kidnapped LGBTQ+ teens to uncover the camp’s dark secrets and take the whole place down.

I have been hearing about this book for so long, and then I read it and it was beyond anything I had imagined. Yes, it's like LOST or LORD OF THE FLIES but queer, but it's anything but derivative. This book takes so many literary conventions and busts them apart, then crafts them into something utterly new. I loved the daring nonlinear unraveling of the timeline and mystery, which goes so much deeper than expected. I loved how unflinchingly the book examines the messy reality of queer life, and all the places the queer community builds family and strength for themselves. This isn't a book written for someone who wants a smoothed-over image of queer experiences, you can tell this comes deeply from a real OwnVoices perspective. It's for the young people who need to hear that voice, their voice, and see both the struggles more inescapable than an isolated island and triumphs possible. The presentation of queerness was so good (including a model of how to handle pronouns for trans characters through a character's POV). Connor is a voice that's going to stick in my head for a long time. The story is a wild adventure, but by the end I was a crying mess, holding my breath as I turned the final pages.