Off Book: WENCH by Maxine Kaplan 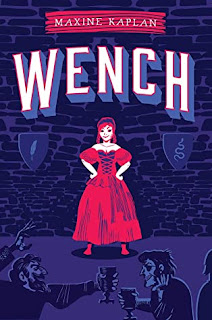 
Tanya has worked at her tavern since she was able to see over the bar. She broke up her first fight at 11. By the time she was a teenager she knew everything about the place, and she could run it with her eyes closed. She’d never let anyone—whether it be a drunkard or a captain of the queen’s guard—take advantage of her. But when her guardian dies, she might lose it all: the bar, her home, her purpose in life. So she heads out on a quest to petition the queen to keep the tavern in her name—dodging unscrupulous guards, a band of thieves, and a powerful, enchanted feather that seems drawn to her. Fast-paced, magical, and unapologetically feminist, Wench is epic fantasy like you’ve never seen it before.

WENCH was a fun romp with admirably strong female characters--strong in all different ways! The world building will greatly appeal to the Minecraft/gaming crowd. As the magic system was explored and developed into more intricate systems, I kept thinking of all my students who would would be totally entranced by this story. It's a little episodic--the main focus throughout sits squarely on the stout, capable shoulders of the title wench, Tanya, as she goes in search of the one thing she wants and ends up exploring farther out into the world and into herself than she planned. The larger cast of characters are fun, especially Jana. The body positive rep/exploration (for female and male characters) is another plus.
Posted by Leanne at 2:14 PM